This report evaluates “Global 3D Printing in Aerospace Market” by studying Ecosystem analysis, trend intelligence and market revenue analysis. Rapid innovation in the technology of 3D printers is likely to expand 3D printing capabilities in the global 3D Printing in Aerospace Industry in the coming years. The airline industry is a driving force behind the development of the 3D printing technology in the aerospace industry. Airlines depend on 3D printing to improve supply chain limitations, reduce warehouse space, and shrink waste materials in conventional manufacturing processes. The increasing use of 3D printing in the aviation industry is expected to lead to market growth in the coming years.

The introduction of advanced technology 3D printers is expected to lead to advancements in 3D printing capabilities in the aerospace and defense industry in the coming years. Currently, ULTEM materials are popular in the aerospace industry, owing to their heat resistance properties. Companies are utilizing ULTEM materials to manufacture the inner shell for freezer units, which contain all the necessary mounting structures. Thus, an advancement in ULTEM materials is expected to provide growth opportunities for the market.

3D printing in the aerospace industry is fragmented, with the presence of several players in the market. Stratasys Ltd. and 3D Systems Corporation are some of the prominent players in the market. The market is witnessing a significant number of strategic collaborations and partnerships to develop mainstream applications. For instance, Norsk Titanium, a Norway-based company, has worked in partnership with NDTL, Pratt & Whitney, and TURBOCAM International to develop and test integrally bladed rotor (IBR) via 3D printing to be used within turbine engines. Boeing, together with Norsk Titanium, is functioning on titanium structural components for its 787 Dreamliner jet.

Increasing demand for 3D printers in space engineering and research programs is driving the Global 3D Printing in Aerospace Industry. The global 3D Printing in Aerospace Industry is segmented into UAV, aircraft, and spacecraft. The aircraft segment is estimated to be the growth engine for the 3D printing market during the forecast timeline. The US-based GE Aviation adopted 3D printing technology to produce engine components. Major engine OEMs are also adopting the technology to produce 3D printed parts at a faster rate.

Hexcel corporation signed a contract with Boeing to produce HexPEKK-100 aerospace structures for major commercial aircraft platforms. Hexcel provides high rate serial component part production within a limited period and at a cheaper cost as compared to the traditional methodology. 3D printing technology is widely used in the space industry. It is used to manufacture spacecraft components, propulsion systems, payloads, and other related components. Designing and engineering of the components of an airplane are an expensive process, but the 3D printing technology can solve this issue in less time.

The North American region has the largest market share in 3D Printing in the Aerospace Market among other regions. The growth of the North American market is attributed to the high adoption rate of 3D printing in the aerospace industry, combined with the growing financial support from governments. The adoption of 3D printing technology in the aerospace industry in North America is gaining force because of its quick manufacturing process and technology advancement, which enable engineers to validate prototype designs at a faster rate and thus, speed up the aircraft improvement process.

Asia-Pacific is expected to be the fastest-growing aerospace 3D printing market during the same period, mostly driven by an expanding presence of OEMs and tier players that are trying to tap the increasing demand from key economies such as China, Japan, and India. 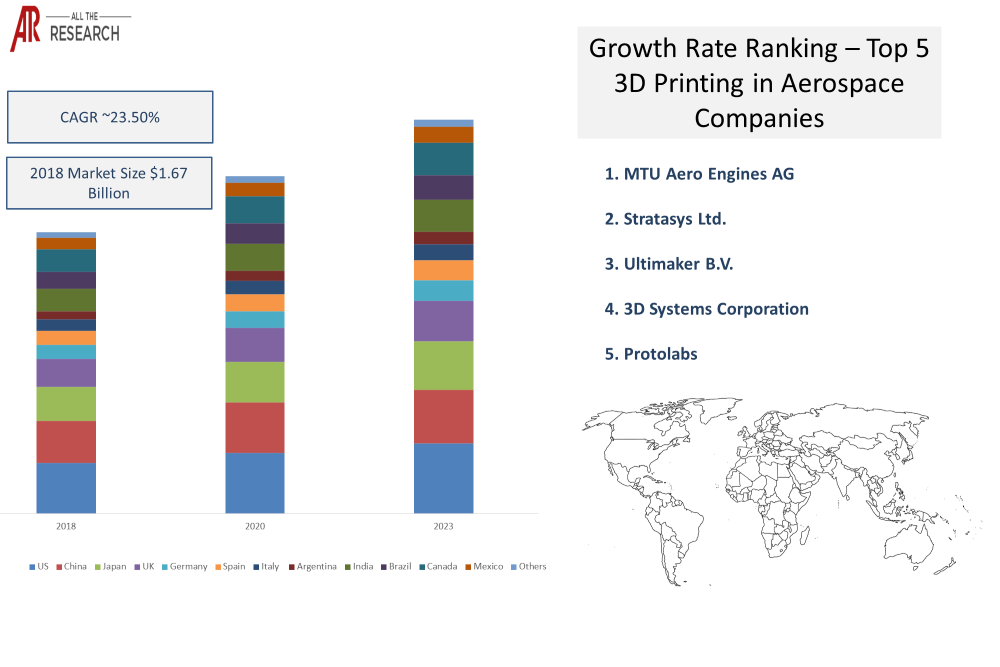 The major players operating in the Global 3D Printing in Aerospace Market - Ecosystem are as follows:

Very few markets have the interconnectivity with other markets like 3D printing. Our interconnectivity module focuses on the key nodes of heterogenous markets in detail. Data Analytics, Cloud Logistics, Machine Learning, and Computer Vision markets are some of our key researched markets. 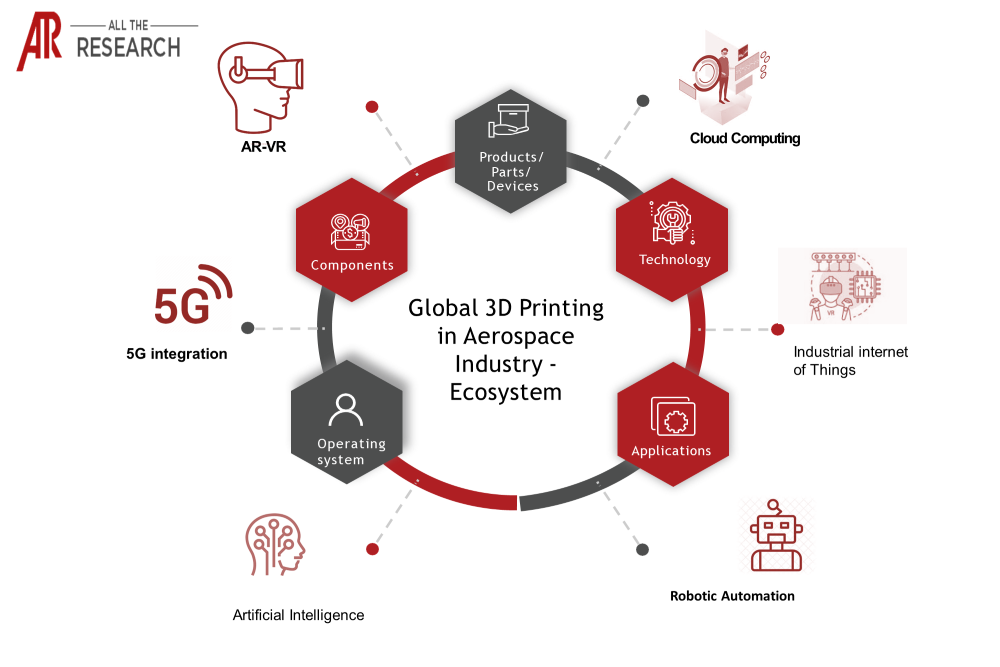