The global market for Sensors in Augmented Reality (AR) & Virtual Reality (VR) Market Ecosystem was valued at US$ 324.0 Mn in 2018 and is expected to reach US$ XX Mn by the end of the forecast period, expanding at a CAGR of 26.20% during the forecast period.

Devices that include AR VR may soon replace mobile computing, owing to their technological superiority. Since 2016, several AR VR-enabled products have been introduced in the market by companies including Google LLC, Sony Corporation, and Oculus VR. Since the acquisition of Oculus, Facebook Inc. has acquired 11 more AR VR companies. The demand for AR VR has witnessed the strongest growth from industries such as retail, consumer, healthcare, aerospace, and military, among others. Owing to the robust growth of the AR VR market, the demand for sensors has also witnessed a good growth trajectory. Earlier, AR VR systems had limited sensor technology, which also limited the achievable levels of presence and immersion. Earlier, sensors also restricted the construction of lightweight AR VR-enabled devices. However, advancements in the field of integrated circuit manufacturing techniques have boosted the capacities of AR VR systems. 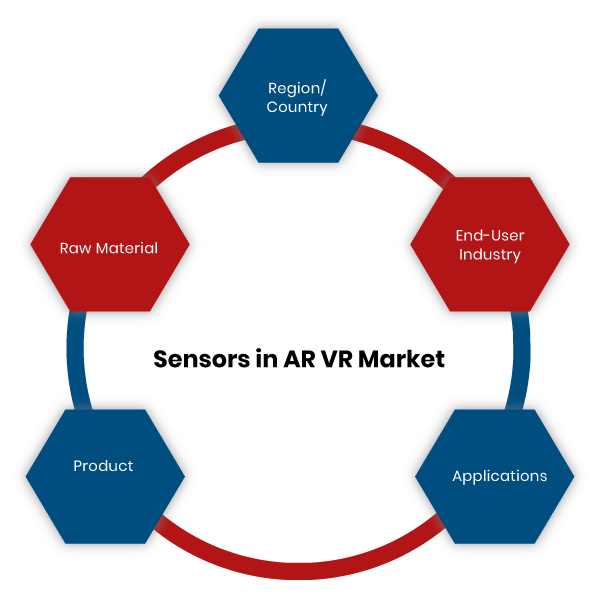 Based on applications, the head-mounted displays segment captured a major chunk of the market in 2018 and is likely to display similar trends in the coming years as well. HMDs have found major usage in several areas such as training & simulation and gaming, among others. Gyroscopes, motion sensors, accelerometers, and magnetometers are some of the sensors used in HMD devices. For instance, the combination of magnetometers, gyroscopes, and accelerometers has given superior viewing experiences within the virtual environment. These sensors help achieve the goal of giving the best viewing experience - the six degrees of experience, also known as 6DOF. The freedom of movement that can be achieved in the 3D space is imperative for virtual reality, allowing for better tracking of the movement of users and amplifying the level of interactivity within the environment.

The growing penetration of AR VR-enabled devices has prompted sensor manufacturers to indulge in aggressive research and development activities, to bring out newer sensors and thus, stay on top of the game. For instance, on 7th January 2019, TDK Corporation announced the launch of a complete portfolio of VR sensors, thereby opening the way for a new class of affordable and accurate all-in-one VR solutions. Key components include the InvenSense ICM-42688 6-axis motion sensor for HMDs and the InvenSense ICM-42686 6-axis motion sensors for VR controllers, among others. Such developments are expected to contribute to the market growth of Sensors in AR VR in the coming years.

Based on regions, Asia Pacific dominated the sensors space in 2018 and is likely to retain its position throughout the forecast period as well, followed by North America. The AR VR ecosystem in Taiwan is expanding at a rapid pace, along with the advancement of related technologies. More firms are entering the sector, targeting the growth potential of the AR VR industry in the country. In October 2018, HTC Corporation announced the inauguration of KosmoSpot x VIVELAND, which is a flagship virtual reality motion-sensing technology exhibition park displaying a broad collection of content in Taiwan. This exhibition park is formed through the collaboration between the Kaohsiung City Government and the Industrial Development Bureau, Ministry of Economic Affairs. The inauguration of this park has added to the growth of the AR VR sensors market in Taiwan.

Major players operating in the space of Sensors in AR VR market are engaged in both organic and inorganic strategies such as merger & acquisitions, joint ventures & partnerships, expansions, and product development, among others. NXP Semiconductors N.V., TDK Corporation, ST Microelectronics, Texas Instruments Incorporated, Robert Bosch GmbH, Analog Devices, and Infineon Technologies, among others, are some of the key companies operating in the field of AR VR Sensors Market.

There are many trends that are having an impact on the Sensors in AR VR market forecast. These, when evaluated from a company’s perspective, can drive growth. Our numerous consulting projects have generated sizeable synergies across all regions and all sizes of companies.

The major players operating in the global Sensors in Augmented Reality & Virtual Reality Market are as follows:

Very few markets have interconnectivity with other markets like AR VR. Our Interconnectivity module focuses on the key nodes of heterogenous markets in detail. Head-Mounted Displays, AR Screens, Silicon, and GaN are some of our key researched markets